• Patch 11.141.247.639: this patch corrects a bug in LDAP Sync "Add/update groups and sync members" objects that doesn't use the correct Base DN for members with paged searches. If you're using LDAP Sync you should apply it.

• Patch 11.141.247.637: this patch corrects a bug that doesn't correctly show the page numbers in password and projects lists. It only affects PHP 8+.

Thanks to everyone who reported these bugs and helped correct them.

Today we're releasing a new version of Team Password Manager, 11.141.247, that adds support for PHP 8 and some other features:

Team Password Manager now supports PHP 8 (8.0 and 8.1). We've had to change many things to support this versions of PHP, but two stand out:

We've recently released an update of the Browser Extension, version 3.17.16, with the following changes:

You can now search for passwords in a specific domain/subdomain in the pop up screen that appears in the login form fields: 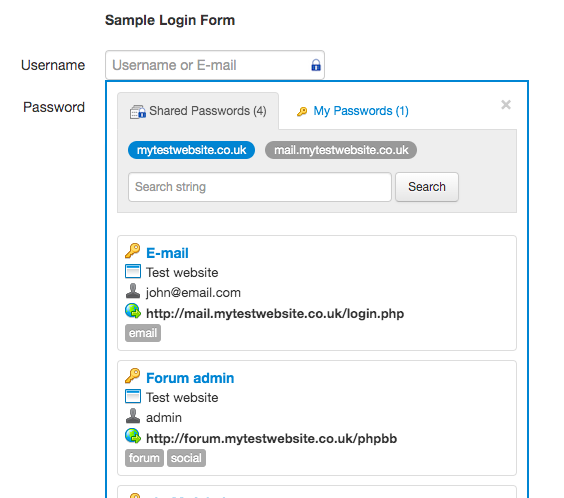 We've recently been working on the following things:

• We've added two new languages: Ukrainian and French. They're available for the latest version of the languages files (currently v.13). You can find them in the language packs page.

The past weeks we've added four documents to our knowledge base:

• Password Reset for Local Users: password reset for local users has been available since day one, but it was never documented. There's usually no need to document how to do a password reset as it's quite straightforward, but the recently developed protection against password reset poisoning prompted us to write about it.

Just a note to confirm that Team Password Manager and any other software developed by us do not use the Log4j Java library, so we're not affected by the Log4j / log4shell vulnerability / CVE-2021-44228.

Today we're releasing a new version of Team Password Manager, 10.135.236, with many changes, two of which stand out: API v.5 and One Time Passwords.

We've released an update of the browser extension (v. 3.15.14) to fine-tune the connection/disconnection of the extension to Team Password Manager. We've also corrected a bug that, in some cases, prevented SAML connections in Firefox.