Beginning in version 2.11.24, Team Password Manager allows users to authenticate against a Lightweight Directory Access Protocol (LDAP) directory or an Active Directory (AD) (Windows). This is useful for organizations that have an existing directory with usernames and passwords, and want Team Password Manager users to be able to authenticate against it.

This document explains everything you need to know about LDAP authentication in Team Password Manager. Here are the main sections:

The first thing you might have noticed, specially if you've worked with other systems that use LDAP authentication, is that the user still has to be created in Team Password Manager. The reasons we do it like this are:

Team Password Manager includes an import mechanism to automatically import and create LDAP users so that you don't have to manually create them.

Setting up LDAP authentication in Team Password Manager involves: 1) setting up one or more server connections and testing them, and 2) creating LDAP users or converting existing users to LDAP. Read on to learn how to do this. 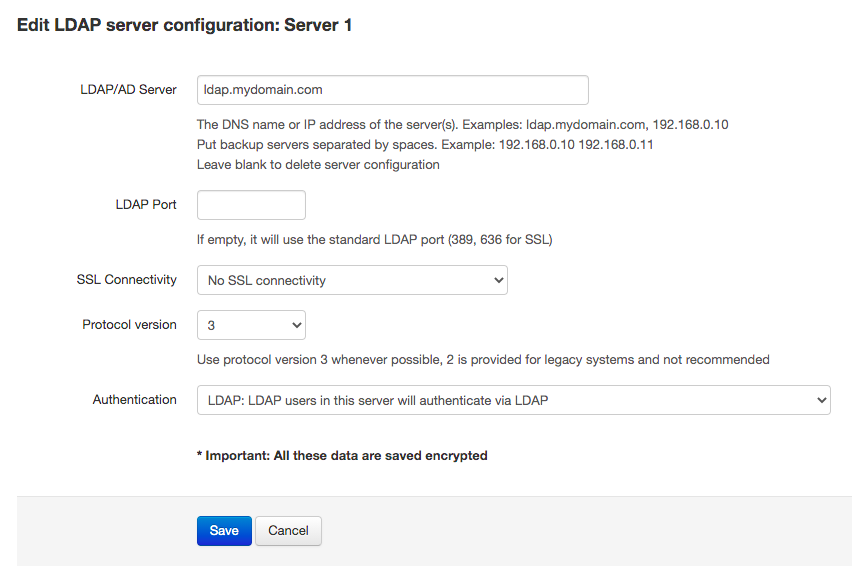 The LDAP server connection settings are the usual for accessing an LDAP server: 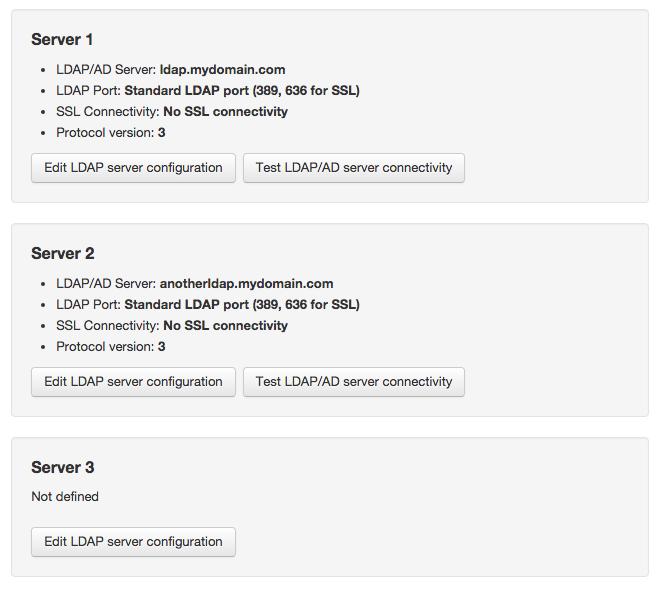 Note that these are not backup servers, but different servers to authenticate users against. Each LDAP user created in Team Password Manager will use one of these three servers (you will set this in the user screen). To learn how to use backup LDAP servers go to the Backup LDAP servers section in this document.

Note: if you're using LDAP and you've upgraded from a previous version that didn't use multiple LDAP servers (versions lower than 6.68.138), your sytem will automatically use "Server 1" and you will not have to configure anything else. 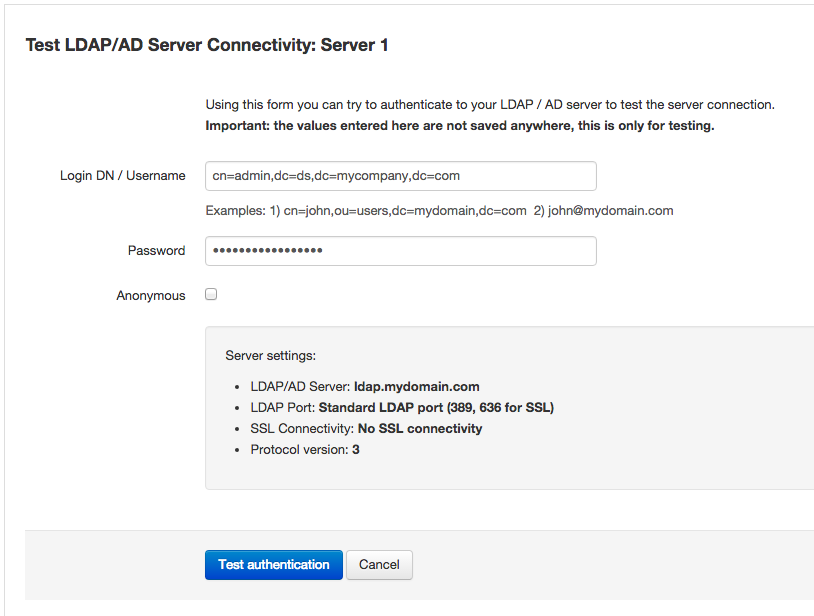 At this screen you can enter the login DN or username and password for a user that has access to the LDAP server, or you can click on the "Anonymous" checkbox if your server supports it. By clicking on "Test authentication", Team Password Manager will try to authenticate with your LDAP server to see if the connection works.

The data you enter in this test screen is never saved anywhere, it's only sent to the LDAP server.

After successfully entering and testing your LDAP server connection(s) you can proceed to create LDAP users. You can do this in two ways: manually or automatically (importing them). This section explains how to create an LDAP user manually. We suggest you learn how to do it even if you're planning to create the users by importing them from your LDAP server.

To create an LDAP user manually do the following:


Note that the "Login DN" won't be validated. You can enter anything you like here, but if it's not the correct DN or Username, the user won't be able to sign in into Team Password Manager (because the bind operation with the LDAP server will fail).

To test if you created the user correctly, have her sign in into Team Password Manager using her e-mail and her password from the LDAP server.

As stated before, this newly created user has all the features of any other user in Team Password Manager. She can use two-factor authentication. She can be part of any group. She can be given access to any project. And so on.

LDAP users are marked with an orange label at any screen, like this: 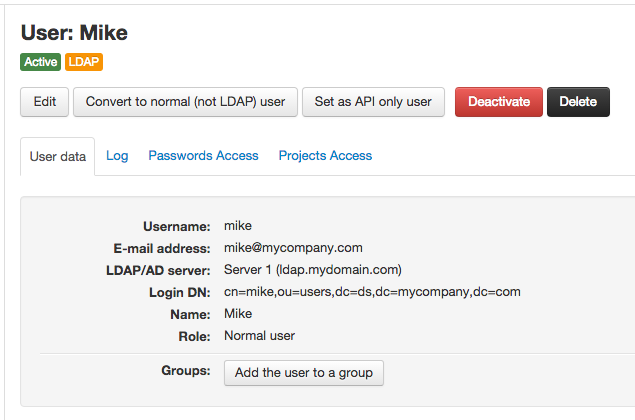 Creating many LDAP users manually can be tiresome and prone to errors. This is why Team Password Manager includes a function to import the existing users in your LDAP server.

The import LDAP users feature is a two-step process that involves: 1) entering the required data to search for the users in your LDAP server, and 2) selecting the users you want to import.

To import users from your LDAP server, do the following:

You can repeat these steps as many times as you need to. You can enter a different base DN each time so that you can fetch user from different branches of your LDAP tree, or you can use another server by selecting it from the list of servers you entered in the LDAP settings section.

Here's a little explanation of the data required to import LDAP users:

You have the option of saving the import data configuration from step 1 to the database. These data are saved encrypted. To do so, just check the option at the end of the form:

There's a debug mode in which no users are imported and debug data are shown. To activate it, check the option at the end of the form (see previous screenshot). This debug mode is useful to test the parameters to see if users will be imported or, if not, which data are being fetched from the LDAP server. Here's a sample of these debug data: 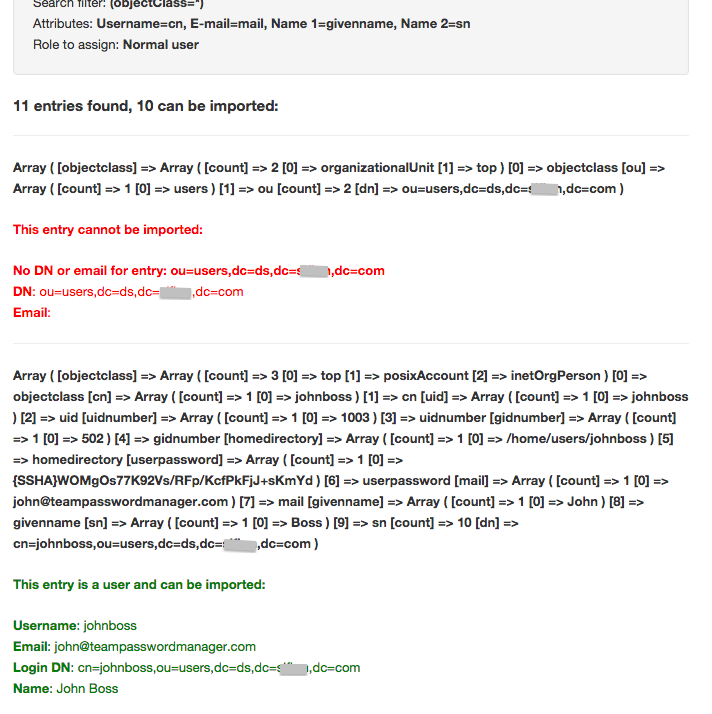 If your Team Password Manager installation already has users that you want that they authenticate with your LDAP server, you should "convert" them to LDAP users instead of deleting them and importing them. You need to do this to preserve the user's permissions and history.

To convert a normal user to LDAP you do the following:

Once you do this, the user will have to be validated against the LDAP server. Some notes: 1) the password the user had is not preserved, which means that if you convert her back to "normal", she won't be able to use it. 2) the user will not be kicked out of Team Password Manager.

Important: we suggest that at least one admin user is a "normal" (not LDAP) user. If for some reason you have problems with your LDAP server or its connection, at least your "normal" admin user will be able to sign in into Team Password Manager.

On the other hand, you can convert LDAP users to "normal" users by doing the following:

From now on, the user will have to authenticate using Team Password Manager's credentials. Note that if the user was previously a "normal" user, she will *not* be able to user the same password as before, and you should set/change her password or she should use the "Forgot your password" feature when signing in again.

For each LDAP server you register in Team Password Manager you have the option of entering one or more backup servers. You do this by entering more than one server separated by spaces in the "LDAP/AD Server" field, like this: 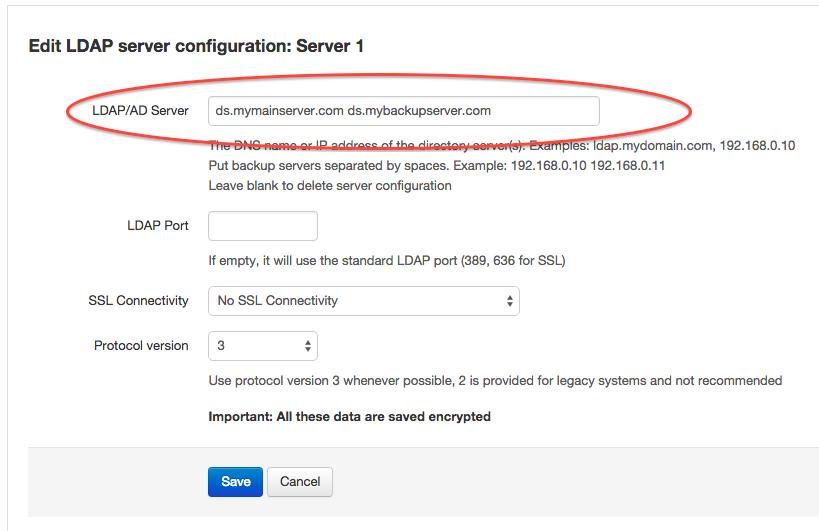 Note that if the first server is not available there'll be a delay (timeout) until the second one is tried. This timeout is usually large (several seconds) in most systems, so you might want to make it shorter. See the next section to do so:

Note: on some systems you'll get the following error message when using a backup server: "Could not create session handle: Bad parameter to an ldap routine". In this case you need to prepend ldap:// or ldaps:// to the second server, like this:

You can set a timeout for the LDAP authentication connection using the TPM_LDAP_TIMEOUT parameter in config.php, like this:

In this case the delay is set to 2 seconds. Note that it cannot be set to 0.

Normally the default timeout is quite large, so it's specially interesting to set it to a shorter value if you're using backup servers.

Explanation of this parameter in the config.php parameters document: TPM_LDAP_TIMEOUT